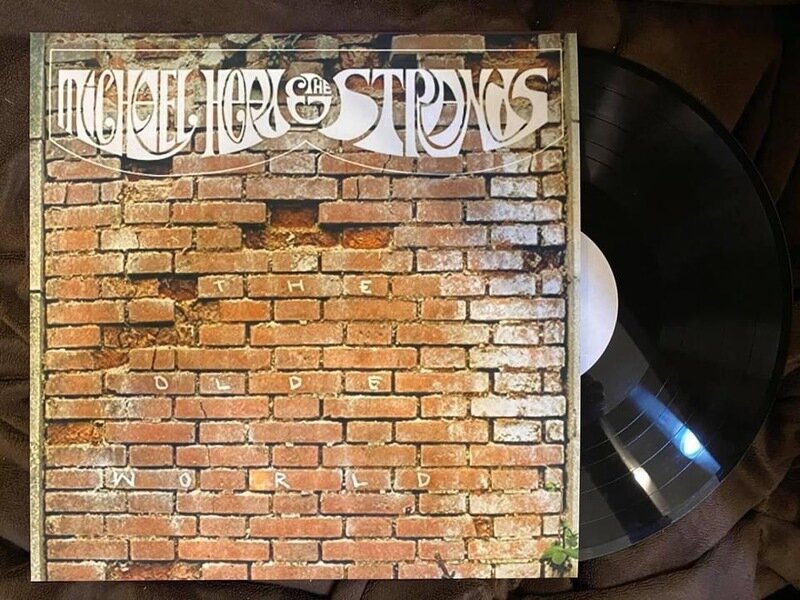 The official release has been cancelled.
Promotional CDs exist.
I made a Vinyl LP for personal enjoyment only .

Michael Head’s 1997 classic album 'The Magical World Of The Strands' is given a sibling 20 years after its completion : 'The Olde World'

'The Olde World' is an exclusive new album of recordings from the same sessions released on 29 June 2015, followed by a reissue of 'The Magical World of the Strands' on 13 July, both on Megaphone, digitally, on CD and vinyl in its original form with a new extensive booklet.

The album "The Olde World" contains rare tracks derived from "The Magical World Of The Strands" released in 1998. Scheduled to be released on June 19, 2015.

"The Olde World" includes unreleased sound sources produced during the recording session of "The Magical World Of The Strands" (under the name of Michael Head & The Strands) and new mixes of songs from that time. There are CD and LP versions.
(The release was canceled just before the release. Some CD promo was distributed.)

☆It’s Harvest Time (band version)
The version of this song on 1997’s 'The Magical World of the Strands' was an acoustic rough mix.
This full band version feels like lifting a veil, uncovering all the hidden tracks from the original recording.

☆Fin, Sophie, Bobby and Lance
Quite typical in style of The Strands sessions, the song has a distinctive jazz feel and after a country-like start veers to improvisation.
The song was recorded again, as Shack on the album ‘The Corner of Miles and Gil’ (2006), with a different melodic line and a more folky tone.

☆Poor Jill
To a few insiders, the song that was most wanting on the 1997 album.
Although it fitted in perfectly, it still lacked a certain something.
Starting afresh in 2014 Mark Coyle managed to produce this excellent new mix on the very first day of the mastering session.

☆Something Like You (quartet)
A strings-only version of this classic from ‘The Magical World of The Strands’.
And a tribute to the beautiful work of Helen Caddick who wrote the arrangement and conducted the quartet.

☆Glynys and Jaqui (acoustic)
An acoustic mix that embellishes the vocal work on the song.

☆Hocken’s Hey (alternate instrumental)
An earlier take of this song from ‘The Magical World of The Strands’ without vocals but with Les’s flute at the forefront.

☆And Luna (acoustic)
A favourite of Mark Coyle’s. An acoustic mix of the original take. This song evokes the aforementioned encounter with West Coast hero Arthur Lee.

☆Lizzie Mullally
The only mix here from the 1995 sessions. Sounding exactly like The Strands especially when compared to the later version by Shack – the B-side of ‘Cup of Tea’ (2006), – yet feeling so different to the 1997 album that it couldn’t fit anywhere, whatever running order was tried.

☆Wrapped up in Honour
A second thought, sparse, new idea trial, shortly after the recording of 1994’s ‘Fontilan’.

"(Don't Let Your Love) Start A War" / The Pale Fountains

"... From Across The Kitchen Table" (album) / The Pale Fountains

"Longshot For Your Love" / The Pale Fountains

Move It To The Rhythm