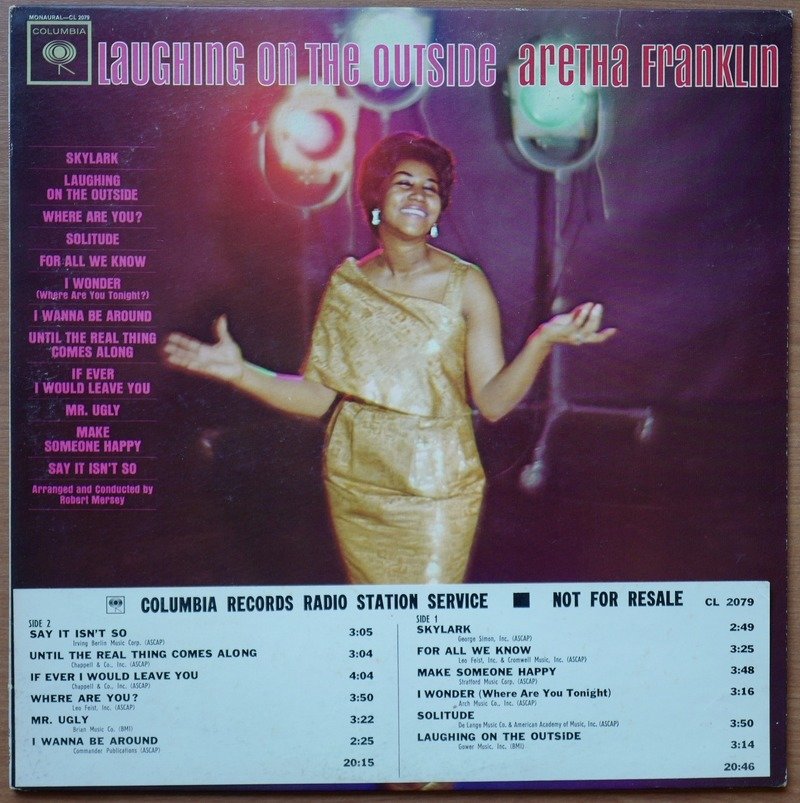 "Laughing on the Outside (Crying on the Inside)" is a popular song written by Bernie Wayne, the lyrics by Ben Raleigh. The song was published in 1946. Aretha Sings the Blues is a 1980 compilation of previously released Aretha Franklin recordings from Aretha's early 1960s tenure with Columbia Records.

Aretha Louise Franklin (March 25, 1942 – August 16, 2018) was an American singer and songwriter. Franklin began her career as a child singing gospel at New Bethel Baptist Church in Detroit, where her father, C. L. Franklin, was minister. In 1960, at the age of 18, she embarked on a secular career, recording for Columbia Records but only achieving modest success. Following her signing to Atlantic Records in 1967, Franklin achieved commercial acclaim and success with songs such as "Respect", "(You Make Me Feel Like) A Natural Woman", "Spanish Harlem" and "Think". By the end of the 1960s she had gained the title "The Queen of Soul".

Franklin also recorded acclaimed albums such as I Never Loved a Man the Way I Love You, Lady Soul, Young, Gifted and Black and Amazing Grace before experiencing problems with her record company by the mid-1970s. After her father was shot in 1979, Franklin left Atlantic and signed with Arista Records, finding success with her part in the 1980 film The Blues Brothers and with the albums Jump to It (1982) and Who's Zoomin' Who? (1985).

In 1998, Franklin won international acclaim for singing the opera aria "Nessun dorma", at the Grammys of that year replacing Luciano Pavarotti. Later that same year, she scored her final Top 40 recording with "A Rose Is Still a Rose".

Franklin's other popular and well known hits include "Rock Steady", "Jump to It", "Freeway of Love", "Who's Zoomin' Who", "Chain Of Fools", "Until You Come Back to Me (That's What I'm Gonna Do)", "Something He Can Feel", "I Knew You Were Waiting (For Me)" (with George Michael), and a remake of The Rolling Stones song "Jumpin' Jack Flash".

Franklin has won a total of 18 Grammy Awards and is one of the best-selling musical artists of all time, having sold over 75 million records worldwide.

Laughing On The Outside

The crowd sees me out dancing
Carefree and romancing
Oh, I'm happy with my someone new

They see me night and daytime
Oh, I'm having such a gay time
But they don't know what I go through

No one knows, it's just a pose
Pretending I'm glad we're apart
And when I cry, my eyes are dry
Oh, the tears are in my heart

So darling, can't we make up?
Ever, ever since our breakup
Make believe is all I do

I'm still laughing on the outside
But everyday I'm crying on the inside
Because I'm still, still in love with you